Artificial Intelligence is augmenting machines to enhance human intelligence. The concept works on the collaboration of humans and machines, thus contributing towards proficiencies of each other. Wao! isn’t it a great partnership? 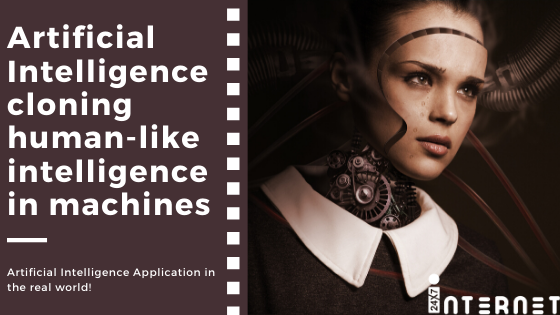 Think what a great combination will result in by infusing creativity, innovativeness, and intuitiveness of humans with great memory and ability of machines to perform larger tasks effectively and tirelessly.

The companies are increasingly relying on technology to assist and monitor their company operations with minimal human assistance. Robotic Systems are increased in Manufacturing to control, monitor the production and delivery of goods. Robots have been programmed to perform tasks just like humans do.

Artificial Intelligence is a modern technology that is now being used in almost every corner of the world. To most of us, Artificial intelligence symbolizes the Robots which are responsible for Massive Destruction. The contribution of weaving such stories in people’s mind goes to great movies like Transformers, Terminator, Robot 2.0. However, the truth is the opposite.

The businesses are revolving around patterns, behaviors and sentimental associations to win the battle in the competitive world. With the growing need of staying ahead of competitors and to grab customer attention, Artificial Intelligence is in the spotlight. There are so many online stores but only a few have been able to receive the limelight. Why so? To outshine in the online business world, it becomes very essential to devise a strategy that makes customers connect to online stores. Artificial intelligence is the present world technology that helps brands understand consumer’s behavior. AI can take impressions of the search by the user. AI can further automate the process by sending recommendations of products through E-mails, Pop-ups.

Chatbot, another interesting feature of Artificial Intelligence is being widely used to serve the customer better. ChatBots are considered a perceptible way of attracting users and increasing user engagement. The piece of software has replaced humans with its ability to interact with customers just like humans do. The personalized, informative and unbiased piece of software has all the powers to serve the customers well. The prime motive of ChatBots to acquire the information and help customers to act quickly and decisively.

Chatbots are being used to aid sales. Most of the companies have started incorporating them to increase customer engagement. If you haven’t still opted for it. You should definitely consider this effective model in your digital marketing strategy.

Voice Assistants, another offering by Artificial Intelligence, is the hottest trend and is increasingly being adopted by people over general search. People find it more interesting and easier to speak and type something rather than typing in to find something of their interest. For eg, I find it relatively easy by saying Hello! Google just navigate me to 24×7 Internet Technologies rather than typing in 24×7 Internet Technologies in google search. Around 50% of users are estimated to be using this amazing feature. Why should one write if the problem is being resolved by just speaking? Power-packed voice assistants Shri and Alexa are gaining prominence by making a great way in our lives.

Machines are known for their ability to gauge patterns. Artificial Intelligence can aid in machines learning past patterns and the ability to predict the future. Many finance companies and banks are leveraging Artificial Intelligence for prevention against tampering of data and scams. AI is increasingly being used in Fraud detection. Analyzing stock exchange data and using it boost the company’s performance is also added to A.I ability.

Well, we all have been listening to CoronaVirus these days. You might be thinking about how are these two interlinked here. Well, A.I has a lot to do in the current scenario and act as prevention against the outbreak of future viruses. Diseases like Coronaviruses leave scientists clueless about the cure but the research can prove to be a boon for prevention against the outbreak of the future virus.

AI has a huge role to play in making a way for Health of people. BlueDot, a Canadian company is in the news these days for scanning lakhs of online articles in different languages daily for imparting public health information. Looking at the seriousness of this virus which has forced people to lock themselves at their places, various healthcare ChatBots are being employed to screen people to the aforesaid devastating virus and advising them to go for tests or not.AI Technology and Machine learning has aided researchers to forecast about the virus, knowing it’s structure and detailed analysis of spreading scenario.

AI has influenced our lives and has already taken noteworthy space in our being.  From chatbots to self-driving cars, everything is owed to Artificial Intelligence.AI has changed to the concept of customer service with automation being the new ruler. Face Detection is an outstanding feature in Social Media apps that can be used in tagging of friends and detecting facial features. AI is being used to push out offensive and hatred content which is responsible for diverting our young generation from their paths.

With creativity at best and infused superhuman intelligence, AI paves the bright incredible future. I feel life is just incomplete without any sort of arts or music. These two are considered very essential in the well being of individuals. A few years earlier I heard a case when a person fully recovered from the Comma state through Music Therapy. Music has been considered a boon for enriching people’s life. Music Therapy has helped people fight against an ailment in a much better way. What could be better than relieving someone’s pain? Isn’t it.

Well, AI is all prepared to set itself in Music and arts. AI is now being used to create music and arts. Yes, the technique has swept in music as well. With its ability to identify patterns, automate services and create efficiencies, AI can be a gamechanger for music industries with the ability to create melodies in a few minutes.

AI is an undeniable revolution with its necessity in almost every sphere of life. The businesses have all eyes set upon AI to outreach their audience and boost their business growth. Are you among businesses who are striving hard to create a long-lasting impression among your audience? You are certainly in the right place. We provide you with matchless AI scientific Development services to create a niche in the market. Redefine your business growth with power-packed AI-infused apps. To know more you can connect with us at [email protected]

Reach us for ultimate AI apps to hike your business growth!